Our ever-changing selection of previously owned pianos is comprised of many of the most renowned instruments you’ll find anywhere, such as Steinway, C. Bechstein, Yamaha, Kawai and most others. At R. KASSMAN, we thoroughly inspect every piano we offer in order to verify that each meets its original performance specifications, and our expert technicians routinely restore them to original condition.
These meticulously refurbished instruments will bring a sound and aesthetic to your home that is nothing short of unique and majestic.
See below to view our current selection of previously owned pianos. Keep in mind that our collection changes regularly, so to see our most recent acquisitions, visit our showroom in Berkley.

In polished ebony, this gleaming piano looks and performs like new. Built in 1994, the piano was purchased new in San Francisco and has been in the same family ever since. It was just traded in for a German grand piano, and this instrument has a big sound for its pedigree. If you’re looking for a Yamaha upright, you owe it to yourself to try this piano. 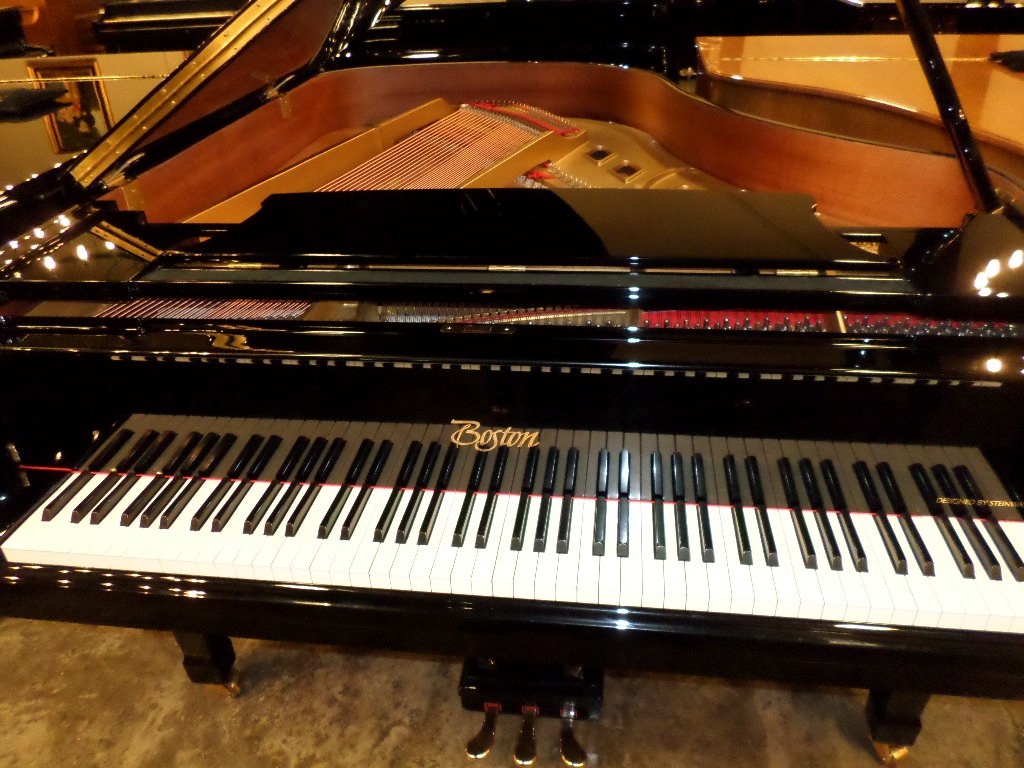 At 5’10 (Model 178), this 2009 classic grand piano, “designed” by legendary manufacturer Steinway & Sons, and crafted by Kawai, is a wonderful investment. From the Steinway website: “The Boston piano features a duplex scale, adapted from the famous Steinway & Sons design, which adds a harmonic richness that simply can’t be duplicated by other instruments in a similar price range… In comparison to other pianos, the Boston has lower string tension. This reduced string tension, along with a tapered soundboard, creates longer sustain, and a more singing quality in the tone (as well as longer piano life). A wealth of other engineering enhancements, including optimal placement of ribs, braces, and bridges, also contribute to the Boston’s superior tone and greater stability… In conjunction with a number of special technologies — unique patents of Steinway & Sons — the result is a powerful, sustained tone. 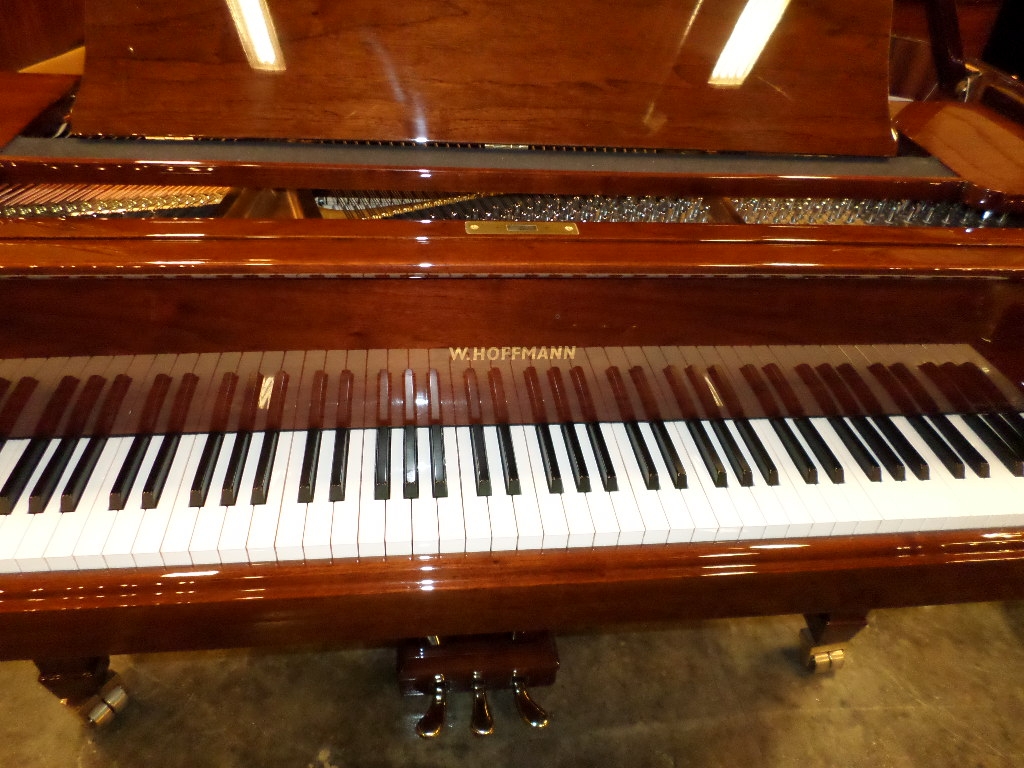 C. Bechstein, one of the most revered brands in piano history, crafts W. Hoffman instruments as their affordable piano brand with German pedigree. The website says “The entire instrument is made in the Czech Republic by C. Bechstein Europe specialists” and from the sound and performance, it is easy to see why these are highly regarded instrument. Purchased new from us in 2014, this piano has been meticulously maintained. With a current new List Price of $63,350, this one – with a Full warranty and matching artist bench – should be the choice of any serious piano buyer.

Wait until you hear this piano ROAR!  This Steinway D is a glorious sounding beast. Originally crafted in 1916, this piano was just completely restored  to exacting specifications by certified craftsmen. Steinway claims that this piano’s powerful bass and resonant treble is the standard by which all other concert grand pianos are measured. Parts and Labor warranted for 5 years, the piano is a pianist’s and investor’s dream. 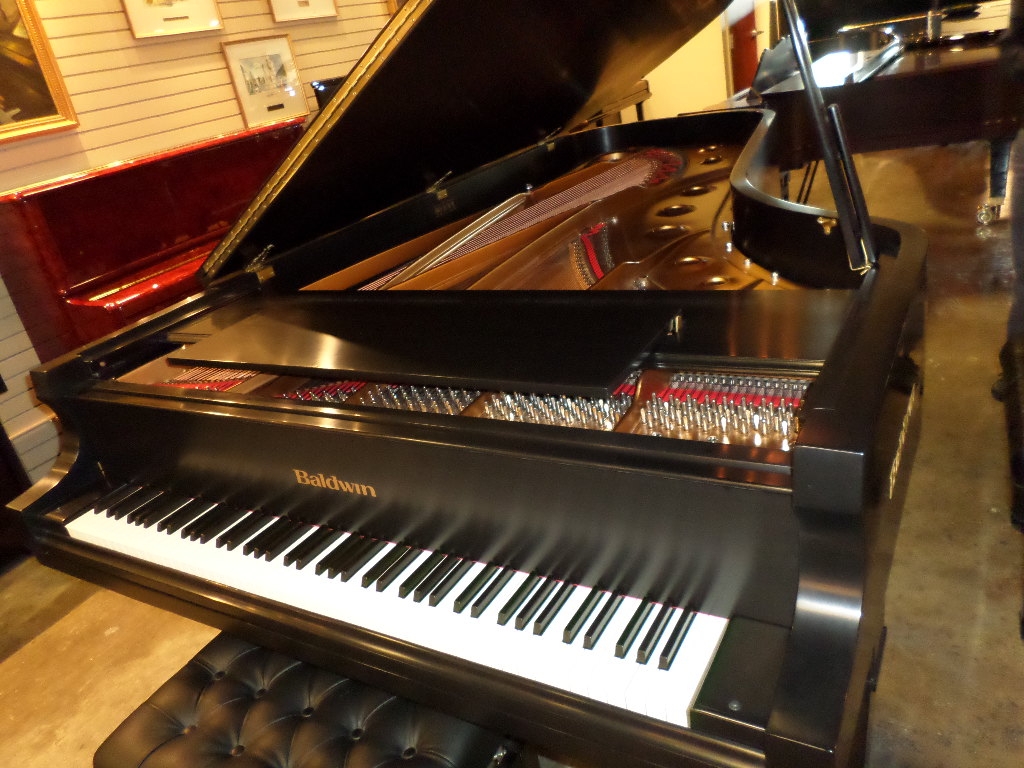 The Baldwin SD10 is considered by many to be the finest Concert Grand piano ever built in the USA. Designed during Baldwin’s stewardship as owner of C. Bechstein of Berlin, the SD10 incorporates a full Renner built and designed mechanism, and European precision, with classic American sound. Famously used by such artists as Leonard Bernstein, Jose Iturbe, Michael Feinstein, Ferrante & Teicher, Marian McPartland and other Artists too numerous to mention here, nearly every major American symphony orchestra had an SD10 as one of its two concert instruments. This SD10 has been impeccably restored in our shop to original standards using only genuine and original components from Baldwin and Renner. You simply will not find a better concert grand. 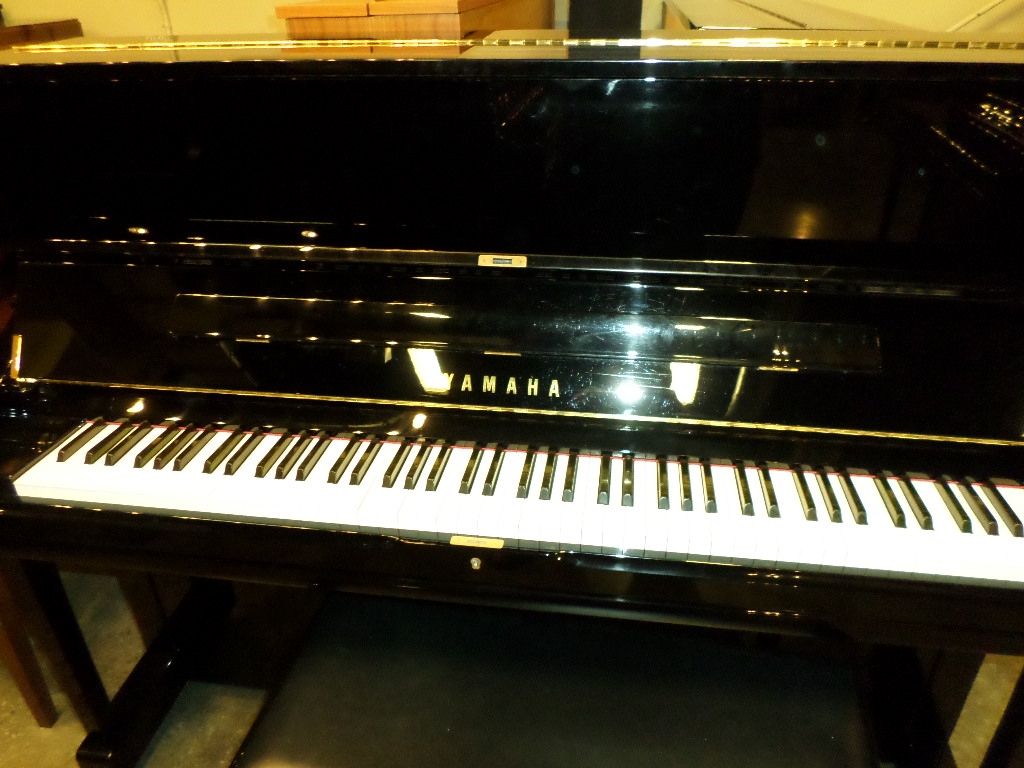 Let’s face it, the Yamaha U1 is the 48″ piano sought by most consumers who don’t play the piano, and it is our #1 traded-in piano. This U1, in polished ebony, is like new in every way and is a perfect specimen. If you like the sound and performance of Yamaha pianos, you will love this instrument. It has the original matching bench and a full warranty. 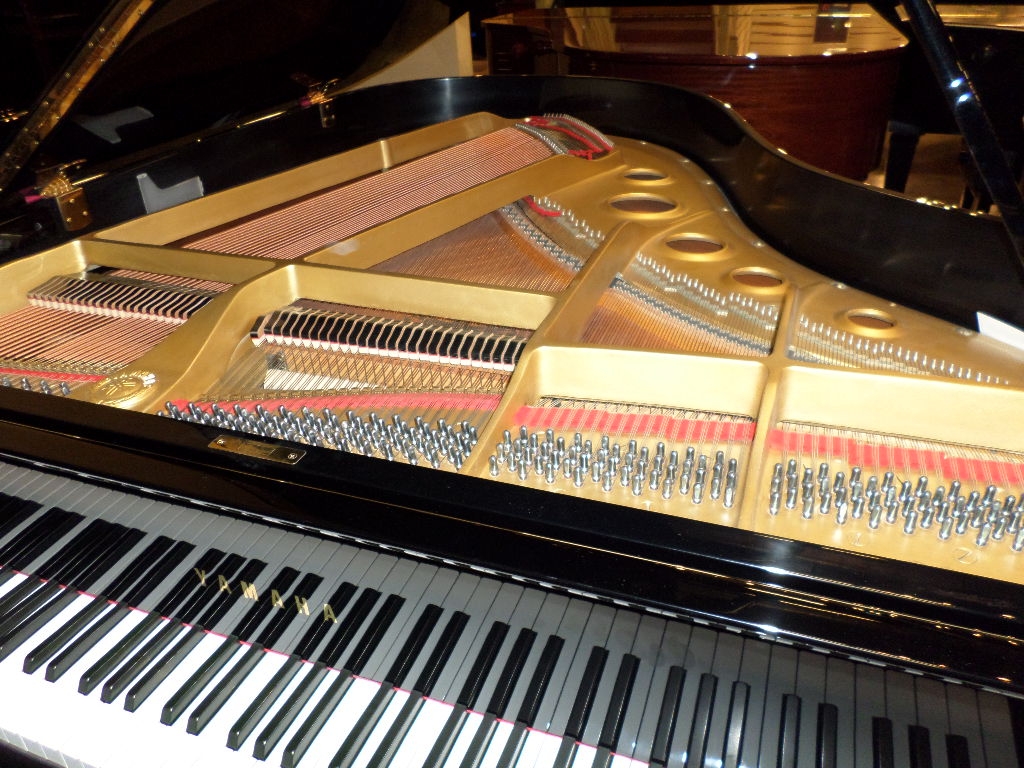 Virtually the same as the Yamaha C3, the G3 was Yamaha’s signature grand piano in the 1980’s before the C series was introduced. Built in late 1981, this instrument has just been “refreshed” with new strings and tuning pins. It has a typical Yamaha sound of the era, and is warmer than the sound profile of current Yamaha products. You will be amazed at the value this piano represents, with a full warranty and matching artist bench.

GOLDEN ERA, 1932 Classic Steinway grand, in hand-rubbed Satin Mahogany, with ORIGINAL perfect soundboard. This instrument was just restored by certified technicians! While this grand is small in stature it has the depth and warmth of sound that has made Steinway a hallmark of the American piano sound. 10 year parts and labor warranty, with matching artist bench, this instrument is an excellent value. 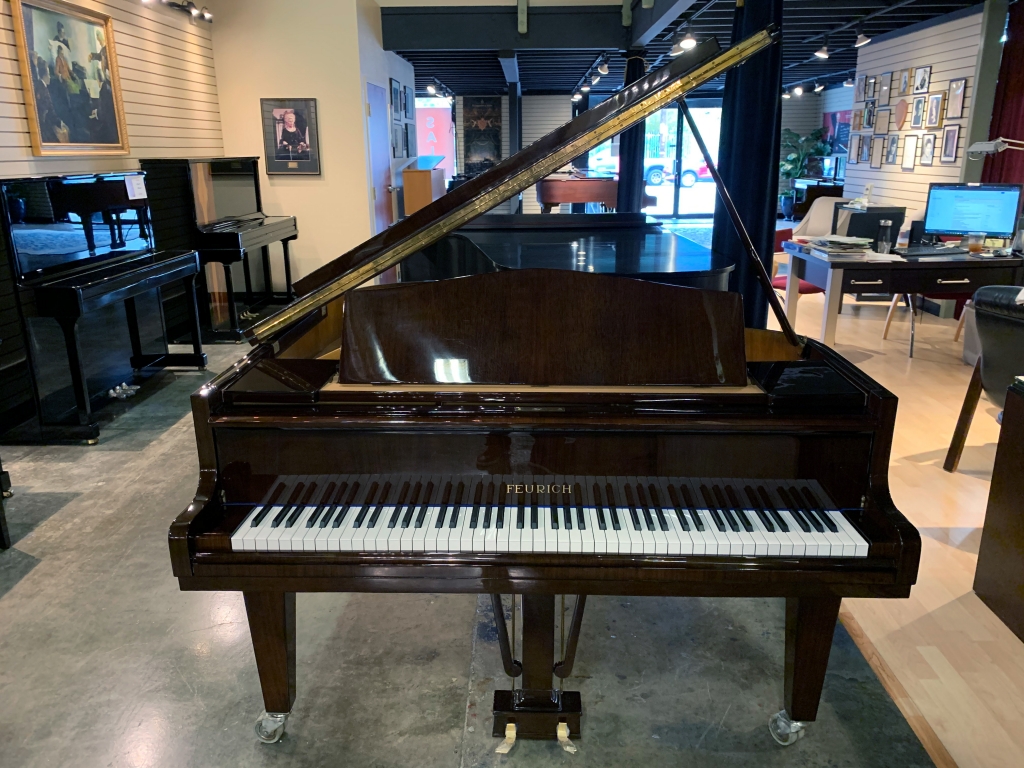 Our master tech has done a complete regulation and voicing along with concert tuning.   Lovely rich sound with heavy touch.  Exactly what you would expect in a Feurich of this vintage.  Beautiful character and absolutely stunning cabinet work.

Measuring at 5’3” long X 5 ft wide this piano is perfect for the home with limited space requirements and a player who enjoys fine European craftsmanship. 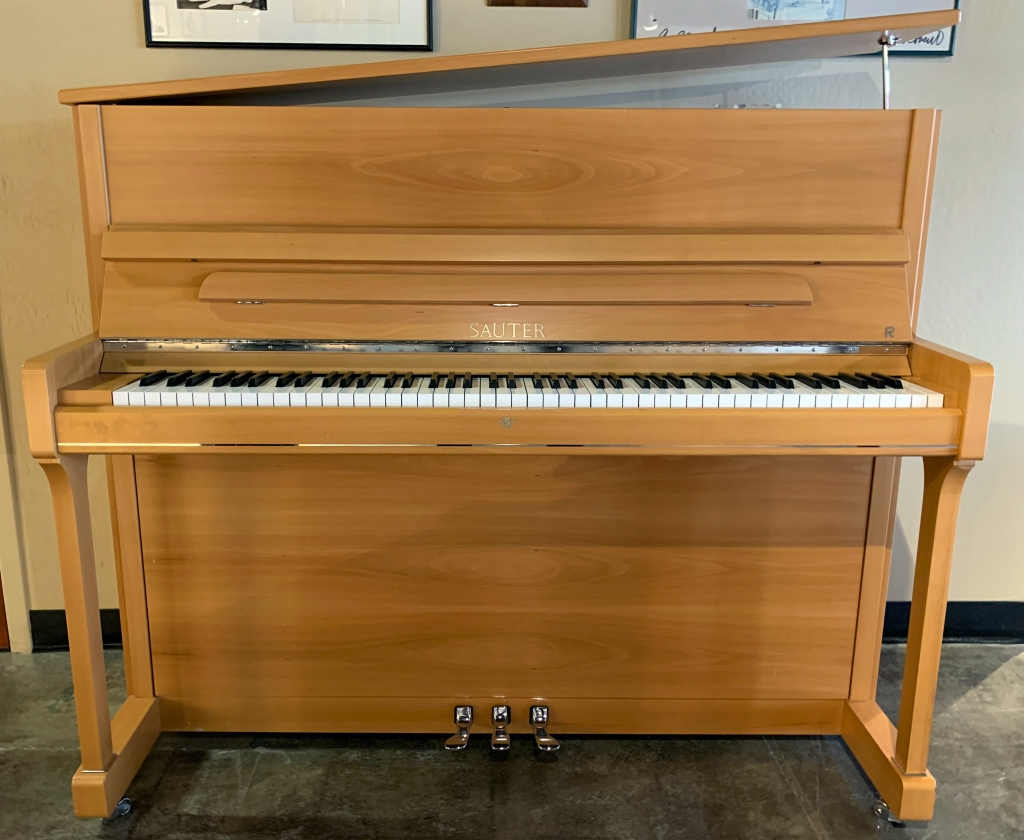 Measuring 48” high x 5’ wide, this piano is perfect for the home with limited space requirements and a serious player who enjoys fine European craftsmanship. Sauter’s double-repetition action is the same one used in grand pianos, a rarity for an upright.

Our master tech has done a complete regulation and voicing along with concert tuning. Beautiful clarity and bell-like upper register with sonorous bass. Features a stunning light blonde cherry wood with satin finish that would shine in any home, especially those with modern interiors. The grand-style lid can also be lifted on top for extra sound and wow-factor. 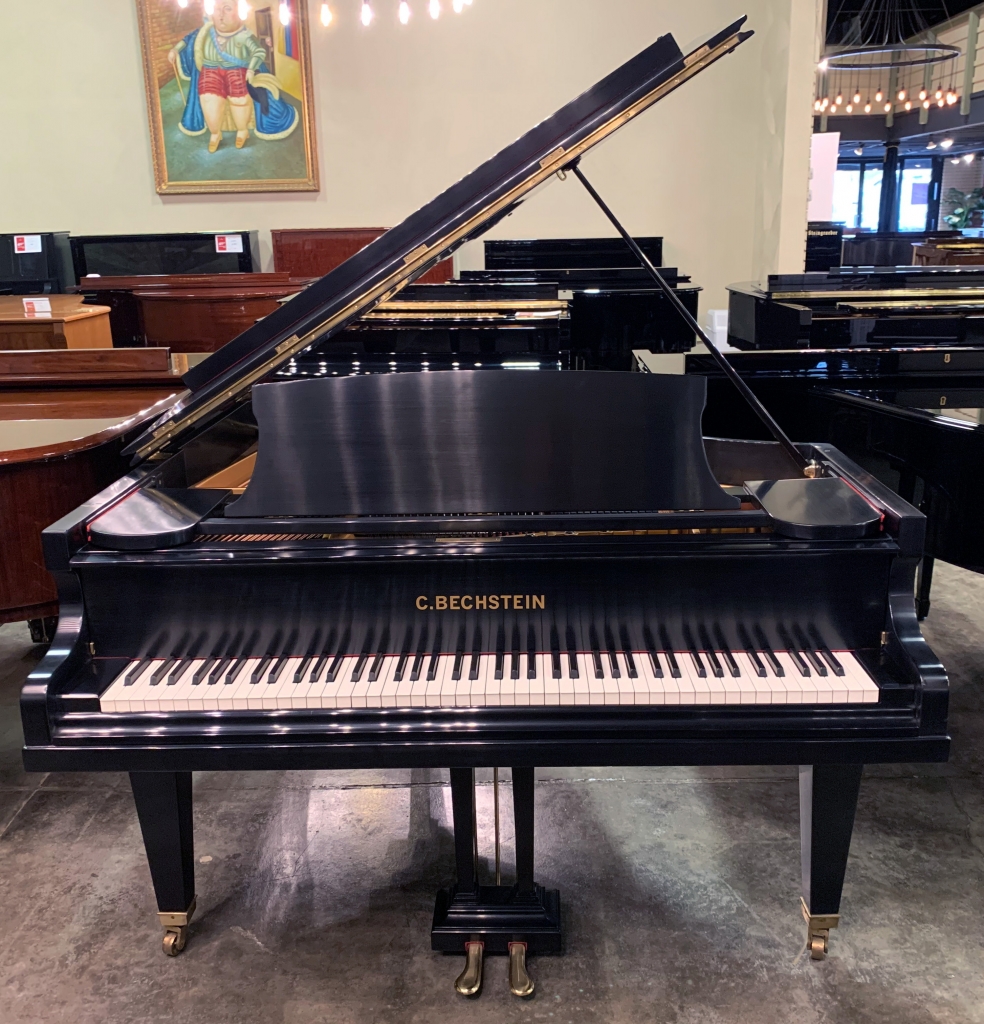 Our master tech has done a complete regulation and voicing along with concert tuning.  This piano still has original ivory keys.

Measuring at 5’6” long X 5 ft wide this piano is perfect for the home with limited space requirements and a player who enjoys fine European craftsmanship. 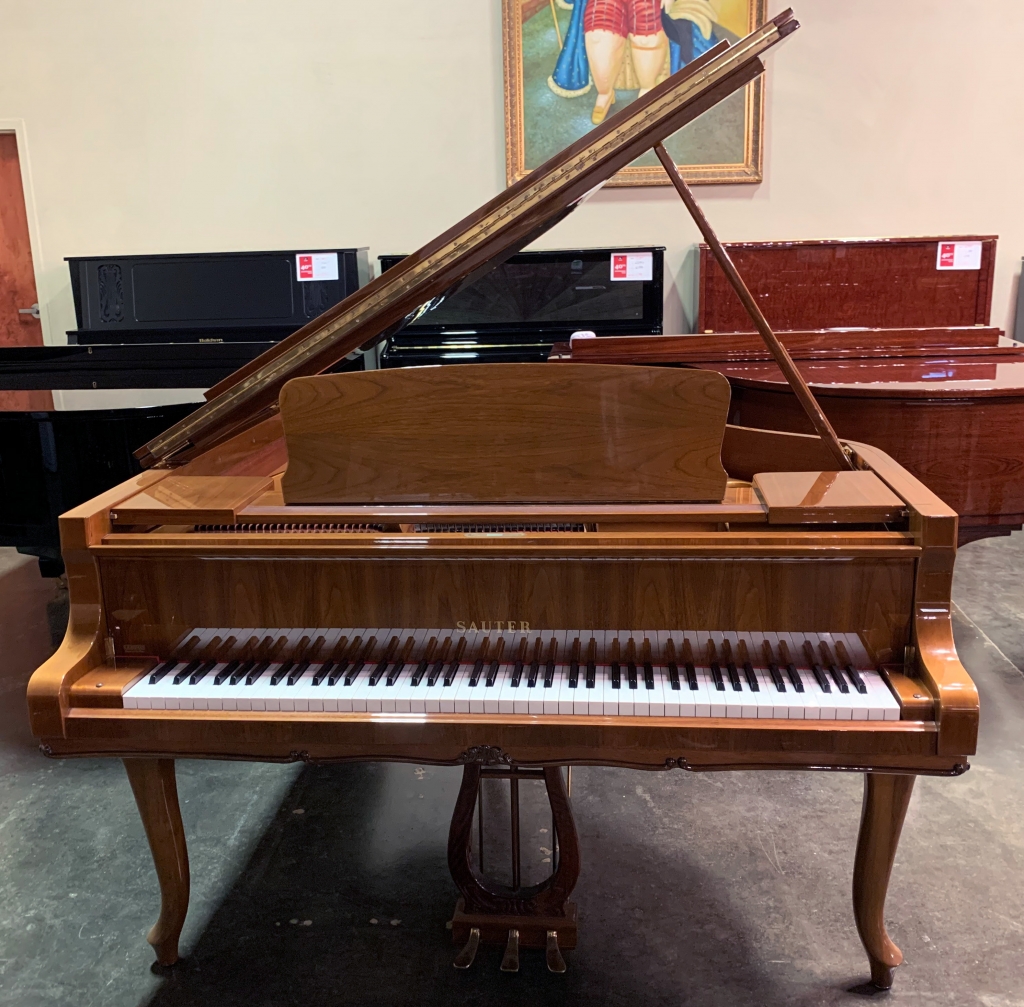 The cabinet has been very well cared for.  R. Kassman originally sold this piano in 1989 and has been in the loving home of one owner since she traded it in. The pin block is in mint condition, pins are original, original strings, plate is in perfect condition, the soundboard has no cracks or ridges and has excellent crown, all the action parts are in great shape and has been regulated correctly, hammers have been voiced to original European voice, belly work and trap work set to standard specs.

The complete voicing and regulation has been completed and all returned to the original detail. European tone characteristics with lots of color is the best way to describe the sound. The touch is velvety smooth and even placement across the keyboard. This is definitely a Sauter piano.  The cabinet work is indicative of Sauter as well.

Measuring at 6’1” long X 5 ft wide this piano is perfect for a home that needs a beautiful piece of furniture BUT also for the player who enjoys fine European craftsmanship. 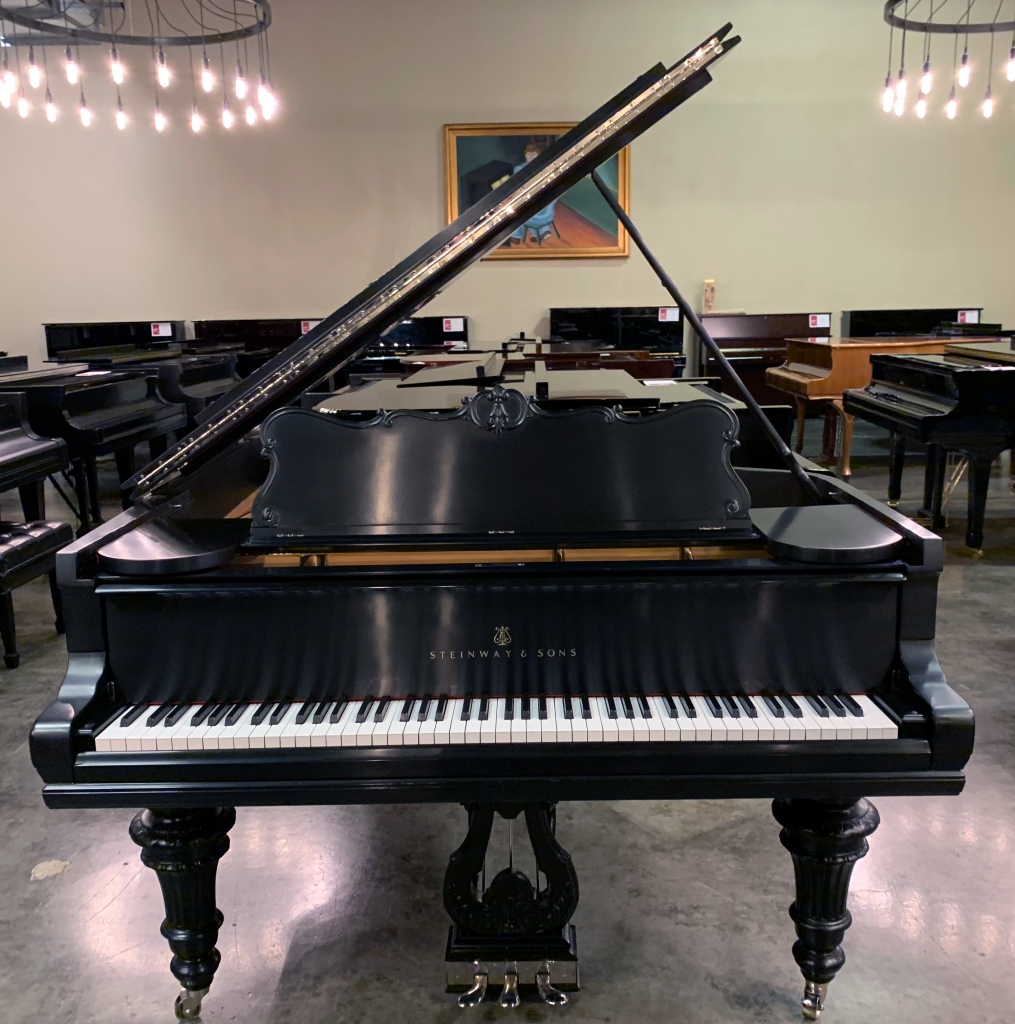 Steinway A 6’2″ In Satin Ebony

This American made 1901 Steinway Model A 6’2” piano serial number 100441 has been professionally restored with Steinway parts.

Kassmans Master Technician has completely voiced and regulated the piano to concert expectations and returned its powerful American performance expectations. The touch, both upweight and down weight have been perfectly balanced and the piano is now ready for a happy home.

Measuring at 49″ this W. Hoffman is known as one of Europe’s finest upright pianos.  It was manufactured in 1997 in Czech Republic by Bechstein’s factory. It has a very European sound and the touch is very nice.

The action of this model is made by Renner along with the hammers.  The hammers have been voiced and the action has been regulated to perform at the very best performance level that you would come to expect from Bechstein of Germany.

If you are looking for a quality upright, with fantastic sound quality, premium touch and gorgeous looks, This is your piano!!! 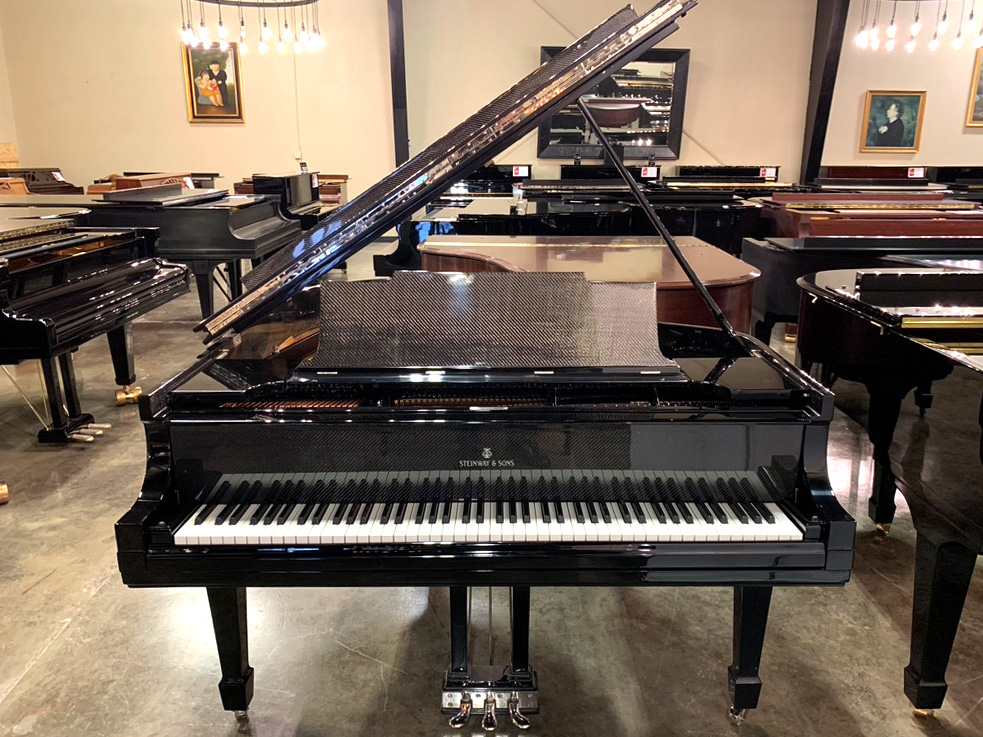 This Steinway model M serial number 225012 measuring 5’7″ was rebuilt by one of the master rebuilders in Los Angeles.  The rebuilder is one of the best on the West Coast and has a reputation for not cutting corners to increase profits.

Obviously it has be rebuilt with a “hidden beauty” design using carbon fiber inlays to create an almost hologram appearance under the lid, around the inside of the rim and finished with nickel trim and a black iron plate that is handlettered with the original Steinway information used as a backdrop.

The action has been completely rebuilt using certified parts along with the pin block.  The hammers and strings are all new and meet the right criteria to make this a formidable instrument in anyone’s talent.

This piano is a work of art that has to be seen in person to fully appreciate.

This 1976 Steinway model F with serial number 442547 in Walnut measures at 42″ tall and is the absolute perfect piano for someone that wants class  in a smaller American case style.  The fluted legs adds a special design element that silently says “Class”.

The piano has one local owner who  has taken extremely good care of it and has had it tuned on a regular basis.  Maintained to the nth degree over the years and has been played only a small amount.

The hammers show minimal wear and the strings are still in perfect shape.  This piano is absolutely adorable and needs a happy home.