Georg Friedrich Karl Grotrian was born in Schöningen, Germany in 1803.He made the acquaintance of Theodor Steinweg who owned a small piano manufacturing company founded in 1835. In 1855 Grotrian entered into a partnership with Steinweg in his business and in 1858 the Grotrian-Steinweg company moved to Braunschweig Germany. In 1865 Theodor Steinweg sold his shares of the business to the Grotrians and left the company. Since then the Grotrian family has continuously been the sole proprietor and management of the company.

The turn of the century (1900) brought with it a wealth of new innovations in the art of piano building. Many of these advancements were introduced and patented by Grotrian, which not only advanced the quality of their own products, but pushed the construction of pianos forward. For example the homogeneous soundboard, the legendary upright model 120, the first precise scale design, the star-shaped back construction, and many more. The result of this pioneering momentum extends into the present and accounts for Grotrian’s consistent superiority in the field of piano design and construction. 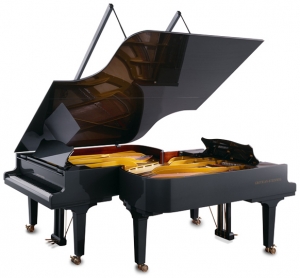 Today, with the sixth generation at the helm, Grotrian combines modern technology with the expertise that could only accumulate through 150 years of experience in the true art of piano-making.

By 1974, Knut Grotrian (son of Helmut, fifth generation) was ready to advance into the future, and the company moved into a new state-of-the-art factory. Grotrian realized the dream of a couple of artists by combining 2 Grands under one special lid and connected by a soundboard bridge, a thus far unheard sound event. Both grands can also be used as solo instrument.

The founders’ philosophy of uncompromised quality has been incorporated in each instrument since the beginning and remains the company’s hallmark today.

Musicians choose R. KASSMAN above all San Francisco piano shops because of our exceptional selection of custom, new and used pianos and our knowledgeable, experienced customer service. Come into our Berkeley, California piano showroom to see, touch, and play our exquisite Grotrian pianos for yourself

View more of our Grotrian Pianos and other fine pianos

We proudly serve the Bay Area, including:

Page load link
HAVE ANY QUESTIONS?
Go to Top